Friday night and into early Saturday morning, we had almost an inch and a half of cold rain.  Saturday morning was foggy and then the wind picked up with some strong gusts.  The house's gutters hummed in resonance when the wind hit just right.  Hummmm!

That doesn't sound very auspicious for astronomy this weekend, does it?

The sky teased with some periods of sunshine, so I staged the equipment just in case, but that seemed certain for naught.

Throughout the day, I watched this weather chart from a nearby weather station on the Weather Underground.


Around 1930, it looked like the wind was finally dying.  I peered out at the sky, and I could see stars!

By 2030, I had everything outside for a night of astronomy.  Of course, at the time I didn't know how breazy it was going to be, but it turns out the the CPC 1100 isn't as easily buffeted by wind as my Dob.

I took a good long peek at Comet C/2017 T2 (PANSTARRS) last night.  It currently is the best opportunity to see a comet with a tail.  I let SharpCap live stack over 10 minutes worth of frames and this is the result.

Note how the captured frames aren't square with each other.  It is evident on the left side of the image.  This results because the sky is rotating with respect to my alt/az mounted CPC 1100.  SharpCap takes each frame from the imager, lines the stars up with the previous frames, and stacks them.  Over time, some stars in previous frames no longer have stars in common with the newer frames.  These stars are on the edges of the image and no longer get any benefit from the stacking of newer frames.

Plate solving, actually.  The term "Plate Stacking" comes from the old days of astronomy when images were on glass plates and astronomers would stack the plates looking for objects that move.  It's the old way of finding comets, planets, flying saucers, and the like.

"Plate solving" refers to the mechanism of using an image to determine where in the sky a telescope is pointed.

I had the CPC 1100 pointed in the vicinity of NGC 1275, Perseus A.  This is a fairly busy region of the sky.  It has a number of dim, difficult to see galaxies.  The is the image that I captured.

Yep, there are a bunch of dim galaxies in this image.  I uploaded it to Astrometry.net and let them do a plate solving on it.  This is the result. 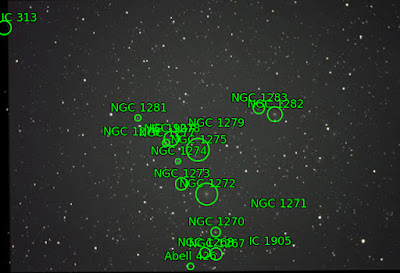 Even more exciting is that SharpCap can interface to a plate solver locally to determine where the scope is actually pointed versus where intended and then issue commands to the scope to reposition accordingly.

This image of NGC 2537 from last night sure is intriguing.

Here is a zoom-in of the galaxy. 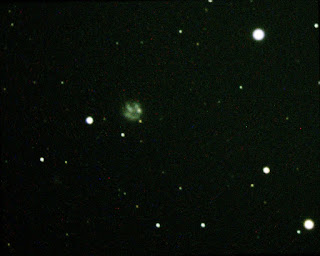 I always take a look at the Orion Nebula when I'm out. With the dimming of Betelgeuse, I was especially keen to do so last night.  "Maybe it'll go supernova while I'm watching it," I thought. 😎

As the laptop was running out of battery, I decided on one last image for the night and captured this beautiful image of the nebula.

I love how the colors show up so easily with this nebula!