Mars, Up Close and Personal!

So what does Mars approaching opposition mean to me as an amature astronomer?


Take a look at these two images of Mars.

The first of which was made by me in January of 2016, months before the last close approach of the Red Planet. It was the best I could do.  Mars was just a featureless ruddy disk in the sky.

The second image was captured just a few days after opposition in May 2016.


I remember cursing the clouds because I could not use the 'scope on the night of opposition.

There is a huge change in the appearance of Mars between these two images!

I was using the same telescope, the same barlow, the same imager, the same capture software, the same laptop, the same driveway location...

The difference between the two images was the position of Mars in its orbit with respect to Earth's.

NakedEyePlanets.com has a really good graphic that shows the apparent relative size of Mars at opposition from 2012 to 2018.  Look at how large Mars will be in 2018!

Email ThisBlogThis!Share to TwitterShare to FacebookShare to Pinterest
Labels: Mars

The videos were captured by me from my backyard. These are raw unprocessed videos converted into AVI format and uploaded to my Youtube channel.   The videos have been truncated from their original full length.

The first video was captured on May 27th 2016, just a few days past Mars' last opposition.

Post processing it with AutoStackkert! and some tweaking with RegiStax 6 resulted in this beautiful image!

I selected the sharpest 10% of the frames for stacking purposes and the resultant image is below.

This shows how powerful it is to be able to collect thousands of frames, to be able to select the best of them, and to able to stack and apply sharpening techniques.

We are still a few months away from Mars' 2018 opposition.

Notice the huge difference in the visibility of features on Mars between the two images!  Just wait until Mars reaches opposition in July!

I'll be making video and images as it gets closer and closer.

Why did I register the domain name "marsneeds.com?"

In astronomy, objects aren't always visible in the night sky. But, during the period of weeks or months when we can see an object, it is said that we are having an apparition of the object.

We are having an apparition of Mars.

In fact, the planet Mars is getting closer and closer to us.  This happens cyclically.

Its closest approach to us happens just about every 26 months.  Some approaches of Mars are closer than others.

The closest approach for Mars in 2018 will take place on July 31, just four days after its July 27 opposition - when Mars and the Sun are to be on opposite sides of the Earth.

I was outside in the wee hours of this morning taking a peek at Mars with the telescope.  Mars is close enough to us that features are starting to be visible.  I put the imager on the 'scope and captured some images.

While waiting for some of the image captures to finish, I thought to myself, "I ought to start a blog of my Mars photos..."

Rational thoughts did not appear to return even after the "post astronomy" nap.

When I set up this blog, Google asked if I would like to associate it with a particular domain and presented me with a list.  "Marsneeds.com"  was available.

How could I resist?

Well, besides being sort of a reference to the classic movie, "Mars Needs Women," it is the general theme to my blog.

There may be other astronomy related photos interspersed, but really, Mars needs photos. 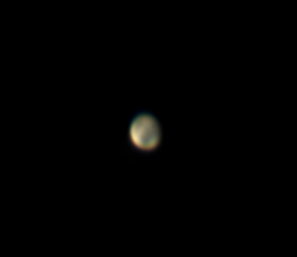 First post.  First photo.  This image of Mars was captured through my telescope in my backyard around 0430 on April 21st, 2018.