It's Red and Round and Going in a Box

Perhaps that is what is causing the bad astronomy weather.  Usually, it's the purchase of new equipment that invokes the cloudy sky curse.

This is an update to my "It's Round and Red" blog post.


I've been busily putting the joystick controller and its telescope interface into their respective project boxes.

Designing and constructing the electronics, and writing and testing the software was fun.  Now it is time to button everything up so it is usable outside, in the dark, and under the sky.

This is the part of any project that I like least.  Boxes are hard.

First, the joystick.  It fits tightly into its project box.  The mechanics of the joystick are comparatively huge.  I elected to put the joystick in the box and mount everything on and around it. 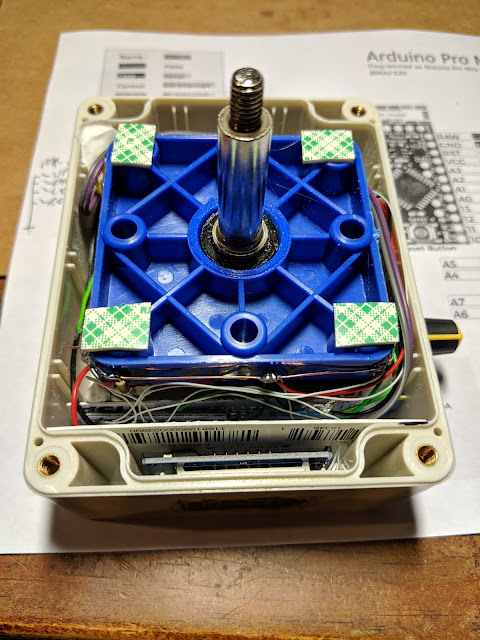 Joystick in a Box

Visible are the display controller, the microcontroller board, and the speed selector knob. Oh, and the huge joystick assembly.  Not visible are the Bluetooth interface, the lithium ion battery, and the battery charger circuitry.

The barcode showing toward the front of the box is on the backside of an expended gift card.  It is used to create a compartment for the display controller.  These little plastic cards make great construction material.

Here is the joystick box buttoned up and powered on.
The LED display, sans bezel at the moment, lights up with telescope slew speed and knob position information when the knob is rotated.  It times out and goes dark after a few seconds.  When the joystick is moved off of center, the display shows the speed value for a few seconds.

What I'll probably do is put a flap over the display so its illumination won't ruin my eyes' dark adaption in those rare cases that I'm not using the laptop and imager with the telescope.

While electrically and mechanically simpler, the software inside the interface is much more complex than that of the joystick.
The telescope interface not only receives direction and slew speed information via Bluetooth from the joystick, it passes data to and from the Wifi interface connected to the planetarium software running on my tablet.  It keeps an eye on the data traffic and injects motion control commands via the SkyWatcher telescope protocol when it is safe to do so.

Visible in this image are the microcontroller, the Bluetooth interface, and two rs232 level converters that connect to the telescope hand controller and the Wifi interface box.

It's not quite buttoned up yet.  I have a little bit more software tweaking to do, but I'm close to finished.

To do this project, I had to purchase quite a number of components as my junk box, while well stocked, wasn't well stocked enough. 😢

I probably wouldn't have purchased this as a finished product for the price of the parts that I have in the project, but I had so much fun with it that it was well worth the time, effort, and cost.

I'm looking forward to taking this out under the sky and doing some actual astronomy with it.