The sky is full of clouds.  And it will be that way all weekend.

This forecast from the Clear Sky Chart website says it all.

The forecast from Astrospheric, while more precise and easier to use, is just as bleak. (Apps for Android and iOS available!) 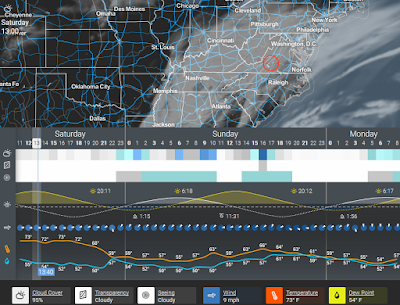 And the local weather forecasters have been threatening us with impending buckets of pouring rain.

So, what does an amature astronomer do in a case like this?

Well, when facing cloudy nights, I could, and often do, just throw my hands up in despair and go hang out in the forums at the Cloudy Nights astronomy website.

There are a lot of friendly, helpful, and informative astronomers there.  Sign up, if you haven't already!

However, I do still have image data from last week's observing session to process.

So, I start AutoStakkert!3  (AS!3) and load one of my Mars video captures.  AS!3 is almost always the first tool that I use when processing planetary and lunar data. 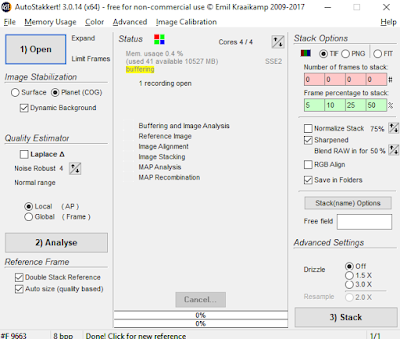 Then, I select some features on one of the Mars video frames for AS!3 to reference while doing its image analysis. 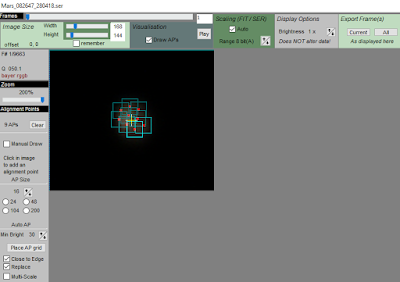 After pressing the "Analyze" button and waiting a few minutes,  AS!3 sorts the frames and gives me this quality graph.

This is AS!3's assessment of the frames in the image data.  Not horrible, but not great.  Mars was pretty low in the sky; There was a lot of atmospheric murk for my telescope and imager to peer through.

What this means to me is that I should not expect good results from stacking more than about 5 to 10 percent of the captured frames.

Throwing caution to the wind, I press the "Stack" button.

This is one of the resultant images.

Next, I bring the image up in RegiStax 6 to do some tweaking of its histogram and RGB alignment. And I'll do a little bit of wavelet sharpening -- not too much, though.  There is not a lot there to work with and I don't want to introduce any "face of Mars" artifacts! 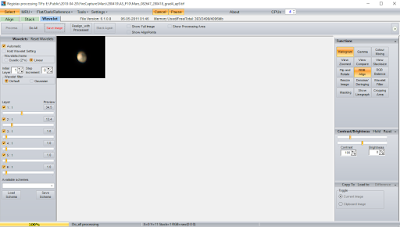 The output from RegiStax.

Some features of Mars revealed!

Up next, I could do some research and divine the names of the evident features, but I'll save that as a subject of a future post with better images as Mars get closer to us.

Here is a teaser from Mars' 2016 opposition!