The Great Conjunction of 2020

This was something that I was looking forward to all of last year.  The conjunction of Jupiter and Saturn on December 21st, 2020, of course.

In the early part of the year, somewhere in my Internet travels on the astronomy sites, I read that Jupiter and Saturn were going to get really close to each other.  I confirmed it for myself using SkySafari.  I dialed in the date and took a look.  This is what SkySafari showed me!

The rectangle in this screen capture represents the field of view of my Cat, with the 0.63 focal reducer, and the ZWO ASI294MC imager.  How exciting!  Jupiter and Saturn in the same field of view with a bunch of Jupiter's and Saturn's moons in the mix!
Three things came to mind, though.  The planets would be really low on the horizon shortly after sunset.  This meant that there would be a lot of atmospheric murk through which to peer.  And Jupiter is really bright while Saturn, not so much.  Would I be able to see Saturn with the imager's gain turned down to avoid overexposing Jupiter?  Would I be able to capture any of the moons with the imager?
I made a note to be sure to not forget to take a peek at these planets as the conjunction approached.  It turns out that the note was not necessary... Everyone, even normal people, became excited to see the conjunction, aka, "The Christmas Star."  Reminders were everywhere.
At the beginning of December, you could see the conjunction happening in slow motion.  Each night, Jupiter and Saturn creeped closer and closer in the evening sky.
I captured this image on December 5th with my smartphone, a Google Pixel 5. 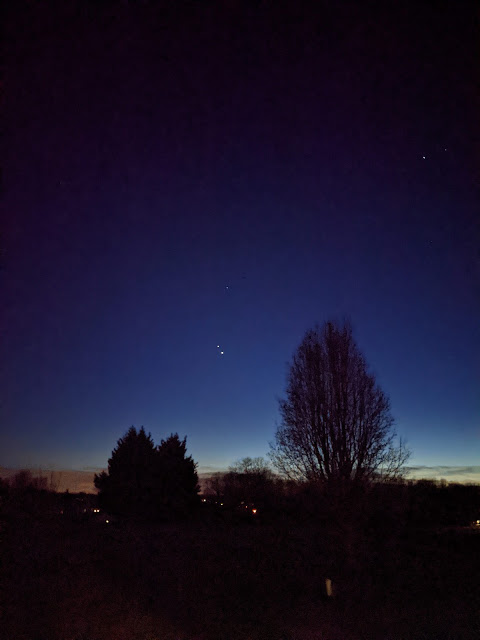 Saturn is above and just to the left of Jupiter. In this gorgeous image, it is clear that the trees are going to pose a problem.  On the 21st, I'll need to set up the Cat at the far edge of the driveway for optimum tree avoidance...
On the 21st, the day of the closest coupling of the two planets, it rained.  Of course.  Not just a simple rain... It was a day of torrential downpours.  That really sums up the entire astronomy session experience for 2020,  doesn't it?  Rain and clouds on critical event days.
On the 22nd, however,  we could actually see the sky again.  The separation of the planets didn't increase much from their closest approach.
Before dusk, I had all of the equipment out and waited for darkness.  Aligning the Cat was amusing.  I used an educated guess for true north and since there were no alignment stars, I used the moon for a point of reference for CPWI's sky model.  I needed a good alignment so that the Cat would track and the planets would stay in the field of view.
At 526 pm, I framed Jupiter and Saturn in the imager's field of view.  I captured hundreds of gigabytes of data and this is the resultant image. (Click to make bigger.) 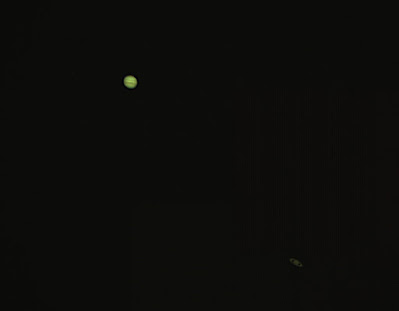 You can see bands of Jupiter's clouds and Saturn's rings.  Also dimly visible are the Galilean  moons, from left to right, Europa, Callisto, Io, and Ganymede.
Planets, when viewed through the eyepiece, are always beautiful.  This view was especially gorgeous.  I'm really happy to have been able to capture it with the imager.